The Importance of the Sharing Economy in the Last Decade

I was asked by the Association of MBAs to share my thoughts earlier this year on the sharing economy and its impact as a socio-economic trend over the last decade.

I wanted to publish this piece on our S&S website as I believe it to be one of the most important models in revolutionising the world of business. Who would have thought that Netflix the world’s largest movie house would own no cinemas, or Airbnb, the leader in providing accommodation would own no real estate? These companies interface with a huge number of people, however, sit at the top of a vast supply chain, all in part thanks to the power of the sharing economy…

How has the sharing economy become a significant socio-economic trend of the last decade?

As the most disruptive of the new-age models, the sharing economy is changing the business landscape and products across all industries. In an innovative environment, it opens up endless ideas and opportunities and has revolutionised the supply and demand marketplace.

The sharing economic model focuses on access to resources that improve efficiency, sustainability and enhances communities. Through countless apps and websites, it allows consumers to share, rent or buy smaller purchases including:

Following the introduction of the sharing economy by the industry’s ‘founding father’, eBay, more than 20-years ago, it has seen a significant evolution, from forward-thinking idea to a standalone economic stream. eBay opened the floodgates to a world that connected the buyer and seller directly and removed the ‘corporate’ middleman. However, it was the rapidly changing needs of the consumer, the advancement of technology – powered by technological innovation – that saw the model significantly dent our everyday lives, becoming the norm.

It wasn’t until 2011 that the sharing economy began to be more widely recognised, with TIME Magazine dubbing it one of the Ten Ideas That Will Change the World. With businesses such as Uber and Airbnb now driving the charge and becoming a force to be reckoned it (operating out of 78 and 192 countries respectively) the model has become a worldwide phenomenon. However, even with this unprecedented growth and seismic culture shift, there is still capacity for this model to develop and branch out even further.

As the sharing economy continues to grow, it is changing the mindset of business leaders and has established a new blueprint for how organisations are run. This model has introduced concepts of connectivity, openness, and community, with businesses recognising the importance of sharing as an outward-facing touchpoint. Because of this economic model, in the past 10 years, we have seen a massive shift in ideology that has spread across the globe.

In the past, we were dominated by a capitalist society, where everything was commercialised. The ideology and structure of businesses were often closed, selective and controlling, with big corporate brands and hedge funds ruling the world.

However, when social networking website Facebook exploded onto the scene, we began to see the sharing mentality seep into the mindset of these capitalist organisations. Facebook introduced a relational way of running a business and fulfilling consumers’ needs. This social media platform not only opened the world’s eyes to the endless capabilities of the sharing economy, but also to the networked way of thinking: being open, nimble and mobile, and operating in a less structured way, enabling wider support and opportunities within business communities and the consumer offering. 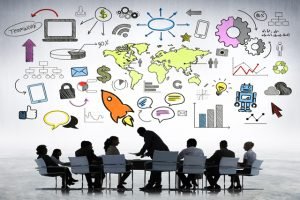 Down with Big Corporations!

Nowadays, businesses and people are living in a ‘pay-it-forward’ society. Consumers no longer allow big corporations to rule and set global, rigid limitations. The public has become more ethically and politically aware, seeking brands that resonate with their evolved values. As a result, they have also become more accepting of the ‘sharing’ ideology.

Ride-hailing service Uber is a great example of this. It listened to the consumer and created uberPOOL, making it easy for people heading in a similar direction, at the same time, to share car rides with strangers, thus reducing the price of the service, per passenger. This also helps reduce traffic jams and the pollution caused by car emissions.

Work Closely with the Little Guy

Businesses are now more willing to share ideas and work collaboratively. The sharing economy has also helped harness and foster the sharing of knowledge, rather than tangible goods.

I believe in the revolution of the sharing economy by the outsourcing of knowledge, through the gig economy.

At Sullivan & Stanley, we drive businesses forward, fully embracing the new-age mentality to help the business world keep up with rapid change. We do this not only by sharing our abundance of knowledge. We also do this by ensuring that our ‘SWAT teams’ (which comprise the top 5% of executives) have the right training and tools to share their knowledge and experience and help build commercial success in this new era.

Our objective is to always ensure businesses do not become obsolete in this competitive landscape by moulding them into a stronger and more resilient shape. Find out more about how you can get in contact with our experts.