When looking for somewhere to live, there are lots of requirements that we must consider: how many bedrooms; what’s the commute to work like; what is the quality of the local schools; is the garden big enough; what are the neighbours like? The list is endless.

On top of this, buying a house is the most expensive purchase the majority of us will ever make. So, as a result, we spend a lot of time and effort planning a move, looking at lots of different houses, driving around areas, researching schools. Once you buy a house, then other than remodelling it, you have to live with the consequences of your decision.

Most businesses still think of software development/engineering work like buying a new house.

This is because the whole exercise is viewed as something that doesn’t happen very often, is expensive, a major investment and not to be gotten wrong. In addition to spending lots of time and effort upfront trying to ensure they make the right decision, they tend to include features they ‘might’ need in the future just like an extra bedroom or room to build an extension. The feeling is that even if you can’t know the future, it’s important to map out as much of it as possible and plan accordingly.

Compare this to the idea of being able to up sticks and move to somewhere new at any time you want, taking everything with you, and adapting to changes as they happen. ‘Van Life’ is a sub-culture of nomadic individuals who do just this by forgoing homeownership and instead embracing minimalism by living in a converted van and travelling the world. 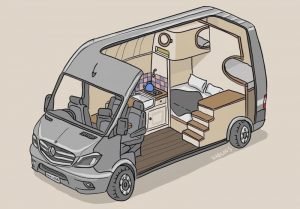 What if businesses embraced the equivalent of van life and built software that is simpler, quicker to code and more flexible? Making a small upfront investment in the tools needed (equivalent to buying the van, fitting it out, filling it with fuel, etc) then using that tooling to stay wherever they wanted or needed to. Whilst still being able to quickly pack up and move somewhere else with little or no notice and minimal effort.

Then when things change you can do the equivalent. If you find you don’t have enough room, you can buy a trailer or add a roof box. Of course with a van you can still have a goal in mind, somewhere you want to get to, but because of the inherent flexibility, you don’t need in detail how to get there.

First, you need the software equivalent of the van, which is your platform. This will give you the infrastructure and tools such as automated testing, deployment pipelines, etc that as a foundation, can be built on. Nobody would expect to build a complete van from scratch, but they might expect to buy one and make some modifications to it so that it better suits their needs. It’s the same with software platforms, companies can build a platform quickly and cost-effectively by using off the shelf Open Source solutions which they then configure or modify to suit their specific needs.

Next, the basic applications need to be added to the platform, such as authentication and analytics, which are the equivalent of the kitchen and sleeping area in the van.

Finally, you grab the maps and travel guidebook and build business solutions and digital products.

To put this simply:

Maps and Guidebooks = solutions and products

The world has recently changed beyond recognition in many ways (and will no doubt change again and again). This means that whilst a few of those businesses that have the software engineering equivalent of a big expensive house, find themselves in the lucky situation to still be living in just the right place and don’t need to worry. The majority have now had to take a job that’s a 3-hour commute away and urgently need to move house. My concern is that the vast majority of them are simply repeating their same behaviour and looking for a new house where they think they will be able to live happily for the foreseeable future.

So, businesses that want to survive the next big event and be able to reinvent themselves regularly to deliver a competitive response, it’s time to embrace van life. If you need any support in understanding how your organisation could make this crucial change, then please get in touch.