We need to talk about target operating models…

…because the dream never quite lives up to reality. I see it every day in my role. Organisations that planned the perfect Target Operating Model (TOM) with everything ordered and colour-coded, only the reality is a chaotic mess because organisations are complex, rapidly changing beasts.

Take a moment to think about how the pandemic has impacted your business:

It’s perhaps the biggest issue we need to consider when we embark on a change initiative: is everything broken?

Yes, you could probably simplify areas, speed up and approach change with a continual improvement mindset. But in reality, most operational parts of the organisation work ok. The problem lies in how change is delivered – which means only the delivery operating model is broken.

A dependence on traditional ways of working, determinism, functional structures and the division of labour has compounded the problem as the pace of change has accelerated. The result is:

We regularly see the effects of a classic TOM initiative: a big consultancy is brought in. The focus is on ‘As-Is’ navel-gazing, with months of design and definition. This ends up as a beautifully designed solution, which is articulated through hundreds of pages of powerpoint and process flows. But the ‘As-Is’ is never as useful as you think – and often, it constrains the outcome. The design is often assumption-led and therefore lacks real context, thus becoming a desktop exercise. And then we get to the tough bit: implementation.

What you get is:

Failed change is inevitable because, in reality, this up-front design, top-down approach simply doesn’t work. We assume that ‘if we think it, we will do it’ – that new knowledge drives behaviour. On rare occasions it might, but only when the idea is aligned to the original mindset, and the required action is easy.  Ask anyone who has tried to take more exercise, eat more healthily or give up smoking. They have the knowledge about why that is a good idea, but many struggle to create new behaviours and habits.

This is sometimes called a ‘rational approach’ to change and is endemic in organisations: ‘I’ll talk, you listen’.

So what’s the alternative?

Instead, let’s consider ‘emergent design’, which uses empowered people who assume ‘if we do it, we will start to think it’. This is known as a ‘normative approach’ to change: ‘I’m not here to tell you anything, but we will study the ‘system’ in front of us together’. When we do, we will DISCOVER dysfunction, delays and idiosyncrasies that were never intended. It fits better with how humans learn best, because when we discover for ourselves, we become more open to search and experiment with different outcomes.

This is the principle behind the S&S adaptive operating model. People are informed of WHAT needs to happen and WHY, but are left to figure out the HOW for themselves.

The following table is designed to show at-a-glance the differences between a traditional TOM and an adaptive operating model – and why the latter is more conducive to sustainable change: 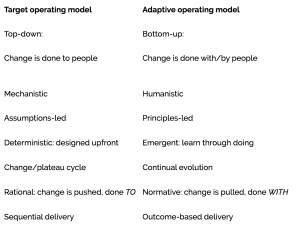 At S&S we implement adaptive operating models using the Glass Tube approach. A rapid immersion into modern delivery techniques, we pull together an empowered, cross-functional, exemplar client team. The client team is paired with a few S&S change experts and they all swarm on a complex problem and solve it, while making it highly transparent to the rest of the organisation. It starts with a look inside the Glass Tube…

In the Glass Tube, the team learns through doing, not training. New ways of working emerge, relevant for their context and created by the team itself. Outsiders can clearly see what’s happening but the ‘tube’ prevents them from interfering and slowing the pace of change. As an outsider looking in, they can see the full complexity of the task at hand. They can see how the team is evolving and organising to solve the mission, by validating assumptions in real-time and releasing value regularly.

A Glass Tube approach leads to a groundswell of excitement, a ‘bow wave’ of empowered, engaged and motivated employees who scale their energy and new skills across the organisation via peer-to-peer influence. It works because change is created from the inside out and uses existing employees to scale the energy.

Why not get in touch and see how an adaptive operating model will benefit your business. One of our core values is to be transparent and honest, and from that initial conversation, we can start to surface any ‘broken’ areas where change will have the biggest impact on your business.